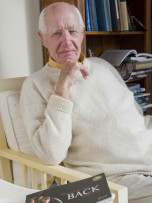 Robin McKenzie is globally recognised as an authority on the treatment and prevention of back pain. His method of Mechanical Diagnosis Treatment is used extensively in more than 27 countries. Despite being an octogenarian, this humble Kiwi is finding it hard to retire. He still finds time to talk on radio internationally, oversee production of animated DVDs, writes and even treats the odd friend. Ironically, it was almost physiotherapy practice mismanagement back in 1956 that led Mr McKenzie to the eureka moment that has changed global thinking on spinal diagnosis and treatment.

‘‘I was in practice in Wellington as a physio and treating a patient, when my next patient arrived, Mr Smith. I showed him to the treatment room and asked him to lie face down on the bed and told him I’d be with him shortly.

‘‘Little did I know the head of the bed had been left raised after a previous patient, so Mr Smith lay there with his back arched backwards.

‘‘When I came in and saw him, I thought, ’Oh, my God’. Bending backwards was considered in medical circles to be hazardous for patients with back pain. It was against everything I’d been taught at university.’’

When Mr Smith stood up, he said the pain in his leg had gone and was now only in his back. Mr McKenzie was amazed, but it got him thinking.

He did a follow-up treatment the next day, applying the same arched-back method and Mr Smith reported that his back was also better.

‘‘It was almost unreal. Here was a man who had severe pain, which he had suffered from for months. I puzzled over it for the next 10 to 15 years, during which time I worked out if I put people in that position or showed them how to do it, they could treat themselves and 80 per cent of the time it worked.

‘‘For those it didn’t suit, it was immediately obvious that they were not likely candidates for the treatment.’’

Understandably, pioneering a treatment that contradicted medical wisdom of the day required a cautious approach, but as patient after patient found relief in the method, Mr McKenzie was persuaded by the evidence before him.

When he spread the word, he met a barrage of disbelief and, at times, even hostility.

‘‘When I was invited to demonstrate my methods in the United States, I asked them to provide patients, so that over four days I could explain the treatment and show the very rapid improvement that could be provided to them.’’

Among his patients at Rancho Las Amigos Rehabilitation Hospital in Los Angeles, was a staff member with longstanding daily pain who immediately responded.

‘‘Before I left that hospital, I had invitations to demonstrate at five more hospitals in Los Angeles.’’ The thirst to know more among Americans was starting and the pressure on Mr McKenzie was mounting.

He spent a month teaching in the US and, by the time he got home, there were six more requests from US hospitals wanting him to return and teach. Within that month, the McKenzie method, Mechanical Diagnosis and Treatment, was beginning to sweep the world.

‘‘I was booked for two years in advance. It mushroomed. It was so revolutionary, people were amazed.

‘‘It was a treatment that was doing everything you weren’t meant to do, but people were getting better.’’

Understandably, there was opposition from orthopaedic surgeons in the US, who warned Mr McKenzie about his method, telling him he could quite possibly cause serious injury.

But the evidence has shaken even the staunchest critics and changed the general approach to spinal problems and pain worldwide.

‘‘Now they have finally proven with the aid of MRI and CT scans that the internal nucleus of the spinal disk does move as I predicted. These scans have shown there is a very good reason why patients get better.’’ It’s a momentous leap to have scientific evidence supporting the McKenzie method, and now to have the support of many in the orthopaedic and medical professions.

An organisation of international scientists, the Cochrane Collaboration, has said that perhaps the way to treat patients with back pain is to implement Mechanical Diagnosis and Therapy – the McKenzie method.

‘‘For years, I thought that the scientific community would never acknowledge the treatment and theory. But it’s now part of the routine in many places, not everywhere, because there still are the diehards, but I think I’ll outlive them, ‘‘ says Mr McKenzie.

Early on, he set a protocol. He would teach in a country until practitioners within the country were sufficiently qualified to become certified. A branch of the McKenzie Institute would then be set up, leaving experts, resident in the country, to treat patients and spread the self-help method.

‘‘One of the most recent branches to be established is in Japan and the method has just taken off there. They’ve already had to set up satellite branches to cope with demand.’’ Among the list of countries is Egypt, Israel, Lebanon and China, most European countries and North America, where the method has a huge following.

It was a trip to Beijing that proved to be Mr McKenzie’s last teaching mission abroad. He returned from a 22-hour flight to suffer a stroke at home, attributable, medics suspect, to deep-vein thrombosis.

‘‘I’ve made a full recovery, but that was enough. I limit my flying time to three hours now. But we’ve got full-time teachers worldwide. No matter what time of the day or night, somewhere in the world an educational seminar is being conducted, teaching people how to help themselves.’’

Not that his lack of flying has stymied his involvement in the McKenzie Institute, his method and global reach.

He recently worked through the night, on air in the United States, talking on one radio station after another, answering questions and explaining his back- pain and management method.

In between talkback shows and writing books (seven to date) he is working with a US company to produce an animated educational DVD.

‘‘Using amazing anatomical animation, we show how disks move when a patient does various things. It shows what you’re doing to yourself, so people can easily understand and see what they are doing to their back and how they can change things.

‘‘It annoys me when I hear people have had endless hours of treatment on their back. It’s not going to help unless people are shown how to treat themselves.

‘‘Everyone should know about musculoskeletal problems and how they can be solved using their own resources. I’d like to see people treating their own back in the same way they approach dental care or washing their hands. It should be just automatic.’’

With that as an endgame, this octogenarian may finally relax, knowing that 80 per cent of back problems can be self- treated once patients understand why and how.

Every clinician should educate their patients, he says.