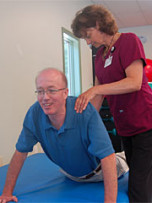 Nancy Guy of Sedgwick calls Glen MacPherson a “miracle worker” for ridding her of the terrible, debilitating back and leg pain she suffered for a couple of months.

What he taught her was how to relieve and prevent the pain herself, using something called the McKenzie Method. It was developed about 50 years ago by Robin McKenzie, a physical therapist in New Zealand.

Now, most physical therapists incorporate at least some aspects of the McKenzie Method in their practices. MacPherson and his wife, Joanne, both of whom are physical therapists with Maine Coast Memorial Hospital’s rehabilitation services, fully embrace McKenzie’s approach to patient evaluation and treatment. They earned certiﬁcation from the McKenzie Institute in 1999, and in 2000 they completed the institute’s intensive diploma program.

The ﬁrst step in the McKenzie Method is a comprehensive assessment.

“We ﬁnd out what different positions and motions affect someone’s pain,” Joanne MacPherson said. “If the various motions we put them through causes their pain to get worse or better or has no effect, that leads us to which speciﬁ c exercises might be best for them.”

With McKenzie, the speciﬁc cause of back pain is less important than what relieves the pain and keeps it from recurring.

“It’s a mechanical diagnosis; we’re looking at what’s going to make it feel better,” Joanne MacPherson said. “Regardless of what’s causing the pain, the way to treat it is to take it out of that position.”

It’s reminiscent of that old joke: A guy goes to the doctor and says, “It hurts when I do this.” And the doctor says, “Then don’t do that.”

While McKenzie practitioners are treating patients, they also are teaching them. “Most patients have the ability to treat themselves and manage their own conditions,” Glen MacPherson said. “So, a big part of what happens with McKenzie is educating the patient and moving them through a system of exercises they can do on their own.”

Nancy Guy said that, before she started therapy, the pain of sciatica that radiated down her leg was constant and intense. The only way she could sleep was to sit on the ﬂoor and lean against the wall.

By the end of just the second week of therapy with Glen MacPherson (pictured above with wife Joanne MacPherson, also a McKenzie clinician), she said, “I began to see that there might be light at the end of the tunnel.”

Now, she is pain-free.

The same is true for Chuck Ives of Bar Harbor, who, a number of years ago suffered two herniated disks in his lower back when he lifted too much weight on the job one day. His doctors thought surgery was probably inevitable, but he persuaded them to let him try physical therapy. His therapist was Joanne MacPherson, and she introduced him to the McKenzie Method.

After a couple of months of intensive therapy, his back was as good as new.

Now, he runs marathons and climbs Mount Katahdin every year. He also is a slalom water skier and a ballroom dancer. The McKenzie Method not only works for many patients, it often works relatively fast.

When Robin McKenzie ﬁrst developed his system of assessment and treatment, his focus was on the lumbar spine, or lower back.

Then, he began applying the same principles to the cervical spine, or neck. In more recent years, the method has been applied to problems with shoulders, knees and hips.

Still, because low back pain is so common — affecting more than 80 percent of people at some time in their lives — that is the problem that the MacPhersons and most other physical therapists see most often.

By Dick Broom
Courtesy: The Ellsworth American via http://mcmhospital.org